The Parish of the Claydons comprises three churches:  St Michael’s in Steeple Claydon, St Mary’s in East Claydon, All Saints in Middle Claydon and Cafe Church in Calvert Green.   The Parish is one of eight parishes in the Claydon and Swan Team Ministry, the Claydons Deanery and Archdeaconry of Buckingham within the Diocese of Oxford.

The Claydons’ villages are based in the Aylesbury Vale District of Buckinghamshire, England.   It is nearly three miles south-west of Winslow, 15 miles north of Aylesbury and around 10 miles south of Bicester.

The name Claydon is and derives from the old Anglo Saxon English: clægig + dun meaning ‘clay hill’, and Steeple from the steep hill around which the village is built.  The village is mentioned in the Domesday Book of 1086 and lists Queen Edith, wife of Edward the Confessor as the holder of the Manor.  It had at that time, a population of 360.  The population grew gradually over the years until the 2001 census records the number of people of 2375.  In the Middle Ages, the Claydons were a stopping point between London and Banbury. During the Civil War, Cromwell garrisoned his troops here before attacking the Royalists troops at Hillesden House,  It has been reported Cromwell spent the night at the Manor House, and his troops on the site of Camp House.

The affix ‘East’ is used to differentiate East Claydon village from nearby Steeple Claydon and Middle Claydon, and from the hamlet of Botolph Claydon that lies within the parish of East Claydon. 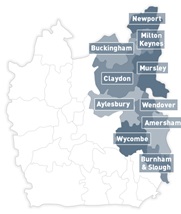 It is believed that a small Saxon church stood where St Michael’s currently stands, but there is nothing left of that building. In 1120, a church is mentioned when it is gifted by King Henry I to his concubine Edith Forn. Perhaps it is their images on the “drib stops” at the West Door. In 1129 Edith gifted the church to Osney Abbey in Oxfordshire, who still owned it in 1291. In 1501, it was gifted to Catherine of Aragon, when she married Prince Arthur, who died soon after. She retained the church as part of her dowry when she married his younger brother King Henry VIII.

In a Medieval Catholic Church, there would have been no seats or pews. Tallow candles would light the church, with reed mats, peat and straw on the roof. The walls were rendered in lime then painted over with lime wash, inside and out, wall paintings dedicated to patron saints would decorate the inside, each with their own altar, about eight in total. Services would be conducted in Latin, with incense and chanting. People would have to come to the church and leave an offering at the shrine, say a prayer and to get spiritual, emotional and even practical support from fellow parishioners. Business transactions would be conducted in the porch area or outside.

The church is dedicated to St Mary the Virgin. The church is situated in a unique position on the top of Sion Hill with nothing between it and the splendid view over Aylesbury Vale. It is visible from whichever way is approached.

The first Rector recorded is named as Richard Hanley and was presented by Geoffrey de Clayton (or Claydon) in 1218. The list of Rectors / Vicars on the south wall of the Nave, which also shows their presentors, gives us some interesting glimpses of history – how the last Rector, Robert de Bodington, was presented in 1369 by John, Lord Grey of Rothersfield who later granted licence to the Convent of Bisham in Oxfordshire to appropriate the church in 1372.

Three years later the Convent was granted permission by the Bishop of Lincoln to appropriate the living to their Monks. They presented the first Vicar, John Cryps, in 1421. In 1500, we find the presentation made by the Prior of St John of Jerusalem, who retained it until the Dissolution. In 1551 William King leased the estate from Lord Clinton, to whom it had been granted and described as “William King”, Citizen and Bocher (butcher) made the presentation in that year. However, by the time he presented again in 1562 , he had become William King, gent! Thereafter, it passed by grant of lease until 1726 when it was conveyed to the Hon, Ralph Verney. In 1752, when he succeeded as Earl Verney, the Vicarage was joined to the Rectory of Middle Claydon. The patronage has remained in the Verney Family and is now vested in Sir Edmund Verney, Bart. 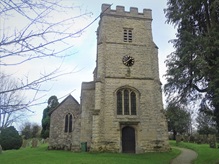 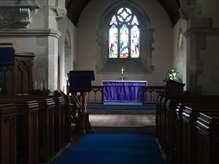 Known as the parish church of the Claydons, the building is believed to date back to the 13th century. The first Rector, is reputed to have been John de Blarewich in 1231, so worship has been celebrated for nearly 800 years.

The church stands within a few yards of Claydon House with a Priest’s door at the top of a flight of stone steps near the Library windows. In 1509 the rebuilding of the Chancel was undertaken during the long lease of 100 years granted by the Verneys to the Giffards. This was finished in 1519. The body of the Church was pronounced by Sir Gilbert Scott to be “good 14th century work”. It is set at a different angle from the House, which it so nearly adjoins, that the dwelling must have been first on the site, For when the dedication was settled, the line from East to West would be established according as the sun rose on the morning of All Saints Day regardless of the orientation of the Mansion. 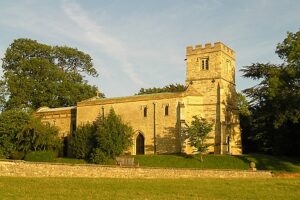